We have served the public for more than a year and have travelled throughout Hong Kong covering 18 districts.  Many of our peers are envious, thinking that we have the best job in the world – staying at designated locations every day, counting and collecting coins and meeting the public.  How would we expect to land such a great job in the first place? 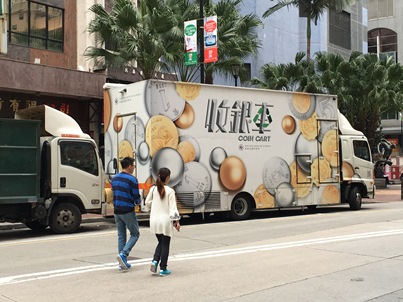 I clearly remember how we were shipped to Hong Kong in 2013, shortly after our birth in a factory in Japan.  At the time, my twin sister asked, “Hey, bro, what do you think we’ll be doing in Hong Kong?”
After thinking for a while, I said, “I’d really like to be a mobile ice-cream cart.”
My little sister did not think much of that idea, “You should aim higher.  I’d like to be a transformer robot!”

In the end, our dreams did not come true.  But, there was something much more rewarding waiting for us.  Upon our arrival in Hong Kong, we were sent to a depot in which a large group of people, including designers and engineers, spent more than six months’ time to give us a major facelift.  They even made a video of the process! 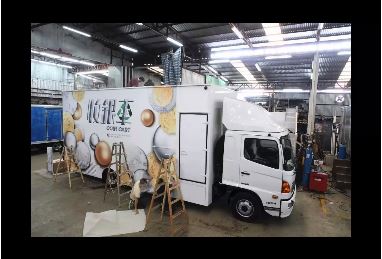 We finally left the depot in September 2014 to join a launching ceremony for the Coin Collection Programme.  Before the ceremony began, a man wearing black-rimmed spectacles came to meet us.  I heard people calling him “Mr. Chan”, and he presented prizes to the winners of a design competition for us.  We finally had the opportunity to meet the champion, a secondary school girl, whose design was adopted for our exterior livery. 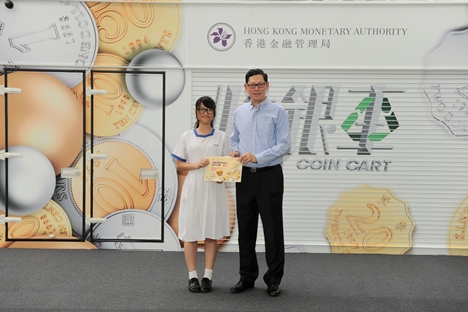 “Mr. Chan”, who was seemingly a key figure in the ceremony, also delivered a speech.  When we heard him say, “Today we are visiting the Upper Ngau Tau Kok Estate with our two coin carts – the modified 10-ton trucks”, we knew immediately this was our role!

The coin cart concept, an original creation of the HKMA, was awarded the “Best New Coin Innovation” by the International Association of Currency Affairs in 2015.  Indeed, this innovative concept has prompted interest from other central banks which have approached the HKMA about introducing similar services in their own countries.  As long as we always try to do our best, something as ordinary as collecting coins can sometimes lead to something extraordinary.  That’s what we call the “Hong Kong Spirit”.

In preparing for the inauguration of the coin cart service, one of the greatest challenges faced by HKMA colleagues was to find suitable parking lots.  Hong Kong is densely populated with narrow roads.  It is difficult to find somewhere that is convenient for the public, while at the same time does not affect the normal flow of vehicles or endanger the people queueing up to change their coins.  What’s more, although we are very well equipped, we cannot operate without electricity.  It is therefore crucial that the locations must have power supply.  As you are aware, idling vehicle engines must be switched off; not to mention that we have to work nine-hour shifts every day, which can hardly be supported by standby generators.

Something that you may not know is that parking lots in some public housing estates did not have power supply originally.  Our thanks go to the housing managers who helped apply for mains electricity to enable us to offer our service at those locations.

Since our inception in October 2014, we have served 180,000 people and collected 154 million pieces of coins with a total face value of HK$174 million.  We once gobbled up as many as 580,000 pieces of coins in a single day!  Our cash escort staff had to come earlier that day to collect the coins such that we could continue serving the public.

Well, that’s all for the first episode of our story.  We look forward to giving you more interesting stories in the next episode.

Written by Ronnie and Mina, the two specially-assigned ‘Observers’ who go around the HKMA office in IFC, Central, collecting interesting facts and sharing with you from time to time.