The Exchange Fund – Last Line of Defence for Financial Stability

The Exchange Fund – Last Line of Defence for Financial Stability

The annual investment results of the Exchange Fund are watched closely by the public in January each year when they are published.  Naturally, people are delighted when the Fund performs well, as it did in 2009 and again in 2012 when it recorded investment income of more than HK$100 billion.  However, volatile market conditions can sometimes cause fluctuations in the Fund’s performance and, understandably, when that happens many become dissatisfied because, in essence, the Exchange Fund is Hong Kong people’s money.  So, of course, whether the Fund is performing well or not is a matter of concern to everyone.

The Origin and Objectives of the Exchange Fund

In discharging its statutory duty of maintaining monetary and financial stability in Hong Kong, the Exchange Fund has played a crucial role in the banking and financial crises of the past few decades.  For example, in the 1980s when several banks (such as the Overseas Trust Bank, Hang Lung Bank and Ka Wah Bank) were on the brink of closure, the Exchange Fund was used to take over or provide a guarantee for the banks.  During the 1987 stock market crash, the Government used the Exchange Fund to support the futures market to prevent its collapse.  Again, in 1991, the Exchange Fund was called on to provide liquidity support to a few banks and a guarantee to the International Bank of Asia to prevent their failure as a result of bank runs.  In August 1998, the Government, drawing on the Exchange Fund, undertook an unprecedented operation to counteract the double play of the money and stock markets by some financial market predators which threatened Hong Kong’s financial stability.  In the most recent global financial crisis, the Exchange Fund provided a full guarantee in October 2008 for all deposits in Hong Kong as well as liquidity and capital support to banks to stabilise the financial system and restore market and public confidence.

Investment of the Exchange Fund’s HK$3 trillion Assets: a Conservative or an Aggressive Approach?

If we keep in mind the statutory objectives of the Exchange Fund, we can then better appreciate the reasons why the HKMA adopts a prudent and conservative approach to managing the Fund.  Our investment objectives are to preserve capital and to ensure a high degree of liquidity so that assets can be readily liquidated to address unforeseen financial disruptions or crises.  Despite this approach, some observers are still of the view that the size of the Exchange Fund, which stood at HK$3 trillion at the end of 2013 – around 9 times the HK$350 billion at the end of 1993 – is far in excess of what is required to maintain financial stability.  Indeed, some think that part of the Exchange Fund should be used to support infrastructure projects or social policies, or that a more aggressive investment strategy should be adopted to seek higher returns.

Yes, it’s true the size of the Exchange Fund has expanded considerably over the past 20 years.  However, our banking and financial markets have also experienced significant growth during that time, with the total assets of Hong Kong’s banking system increasing from HK$6 trillion at the end of 1993 to HK$17 trillion at the end of 2013.  At the onset of the global financial crisis in 2008, when the Government, in October that year, provided a full guarantee for all deposits in Hong Kong through the Exchange Fund, total deposits amounted to HK$5.8 trillion.  So, without a sizable Exchange Fund to back the blanket guarantee, we could not have restored the confidence of depositors and the market to maintain financial stability.

A Buttress and Anchor for Financial Stability

At this point, I would like to illustrate yet another example of the importance of a substantial Exchange Fund to financial stability.  As I alluded to earlier, the Government intervened in the markets in August 1998 to counter the double market play by international financial market predators.  The operation involved the Exchange Fund’s acquisition of HK$118 billion of Hong Kong equities.  In the end, the financial predators were successfully driven off and financial stability restored.  An important point to note is that our stock market capitalisation was only HK$2 trillion in August 1998, but has grown 12 times since then to HK$24 trillion.  If we were to conduct a similar market operation again, the capital required would be 12 times the amount deployed in 1998, or HK$1.4 trillion.  This means that if the Exchange Fund did not hold sufficient assets we would not be in a position to undertake the necessary operation to protect Hong Kong against another speculative attack of this kind.

Therefore, a sizable Exchange Fund is an anchor for Hong Kong’s financial stability.  Nevertheless, even with our best supervisory efforts, we cannot rule out the possibility that a crisis will occur in Hong Kong as a result of external shocks because of our open economy and our position as an international financial centre.  When this happens, the Exchange Fund will be the last line of defence for Hong Kong’s financial stability.  So, we cannot afford to be complacent and must stay alert even in the good times.  Indeed, in 2010 with the global financial crisis on the wane, the ratings agency Standard and Poor’s assigned Hong Kong the highest “AAA” sovereign rating for the first time: one of the main reasons given for the upgrade was the solid backing for our financial stability provided by the massive financial assets held in the Exchange Fund.

(i) The Monetary Base – Under the Currency Board arrangement, currency in circulation, Exchange Fund Bills and Notes, and the aggregate clearing balance of the banking system kept with the HKMA must be backed by over 100% of US dollar liquid assets.  At the end of 2013, the backing portfolio assets amounted to HK$1.35 trillion (please refer to the Chart on the balance sheet of the Exchange Fund), which is far greater than the HK$360 billion before 2008.  The big jump is mainly due to the massive inflow of over US$100 billion into Hong Kong after the collapse of Lehman Brothers.  These inflows became part of our monetary base after being converted into some HK$780 billion under the Currency Board mechanism.  However, this huge sum of money should be seen as short-term liabilities of the Exchange Fund, which is akin to demand deposits kept with the HKMA that can be “withdrawn” anytime by Hong Kong dollar holders, and then converted into US dollars and transferred out of Hong Kong.  Therefore, the backing portfolio can only be invested in short-term high-quality US dollar debt securities in order to preserve capital, and to ensure an exceptionally high degree of liquidity to meet any contingent conversion demand.

(i) The Backing Portfolio – This portfolio can only hold highly liquid and short-term US dollar cash and debt securities, but despite their unimpressive yield, we cannot invest in other asset classes.  With interest rates at ultra-low levels and quantitative easing in place in the US over the past few years, our return from this portfolio is bound to be adversely affected.

(ii) The Investment Portfolio – The Exchange Fund must remain highly liquid and strive to preserve capital and, therefore, should not concentrate on highly volatile assets, such as equities.  The Investment Portfolio mainly holds bonds, supplemented by some equities.  It may be seen as underperforming vis-à-vis most equity funds during an economic upturn or stock market boom, but can avoid major losses in the face of a market slump.  In the two decades since 1994, the Exchange Fund has only recorded negative return in one particular year (-5.6% in 2008).  This is clear testament to the effectiveness of our conservative approach to managing the Exchange Fund.  Indeed, we can easily recall the overwhelming impact on the equity-based funds and portfolios following around 40% fall in the US stock market (the Dow and the S&P indices) in 2008.  If the Exchange Fund is to perform its statutory role of maintaining financial stability in Hong Kong, we can ill afford to subject it to such dramatic swings.

(iii) The Long-Term Growth Portfolio – This portfolio mainly holds private equity investments and real estate assets, which are similar to those asset classes commonly held by some sovereign wealth funds.  The performance of this portfolio has been quite encouraging.  At the end of 2013, the annualised internal rate of return (since the portfolio’s inception) was 16%.  Again, we must not focus too much on its short-term performance as the portfolio consists mainly of medium- to long-term investments spanning 5 to 8 years; nor should we be driven blindly by the desire to seek high returns by expanding the portfolio too aggressively, without regard for its statutory purpose.  As the Exchange Fund is not a sovereign wealth fund, it is prudent that, under the principle of keeping risks within controllable limits, the size of the Long-Term Growth Portfolio be capped at one-third of the accumulated surplus of the Exchange Fund.

The Exchange Fund is the last line of defence for financial stability in Hong Kong.  The HKMA will continue to perform its role with unfailing dedication, and manage the Exchange Fund in a prudent and conservative manner.  Afterall, only with strong “fortress walls” and powerful “weaponry” can we defend Hong Kong if and when we are hit by unforeseeable shocks and crises. 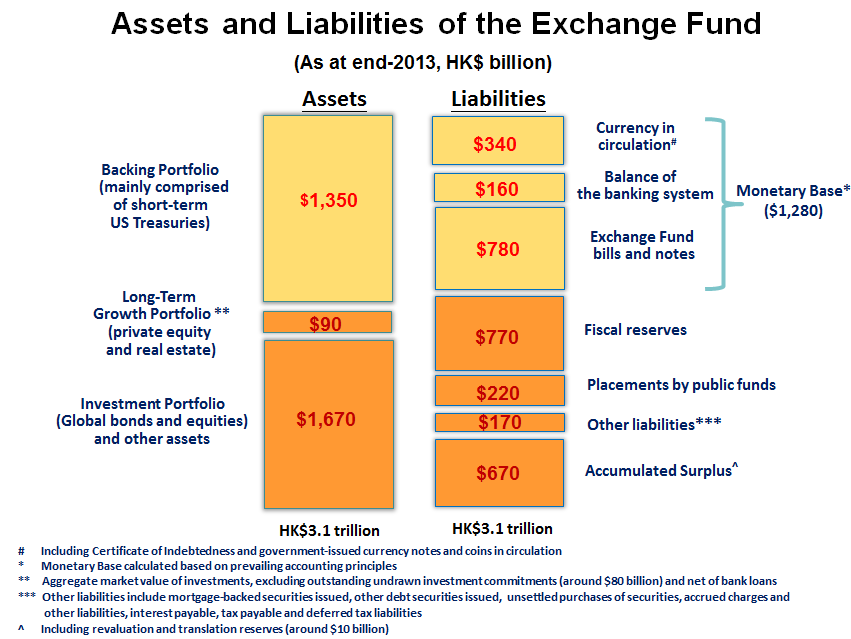