According to statistics published today (Friday) by the Hong Kong Monetary Authority, excluding the deposits created by the initial public offering (IPO)-related loans, total deposits and Hong Kong dollar deposits with authorized institutions decreased by 0.2% and 0.4% respectively in March 2021. For the first quarter of 2021 as a whole, total deposits and Hong Kong dollar deposits grew by 1.2% and 2.7% respectively, and increased by 0.9% and 2.1% respectively if the deposits created by IPO-related loans were excluded.

The monetary statistics in March are subject to distortions caused by fund flows associated with large-scale IPO activities (see Chart 1). As these IPO activities ended and issuers returned application monies, total deposits decreased by 1.0% in March. Among the total, Hong Kong dollar deposits declined by 1.8%, while overall foreign currency deposits remained virtually unchanged. Renminbi deposits in Hong Kong increased by 1.5% to RMB772.5 billion at the end of March. The total remittance of renminbi for cross-border trade settlement amounted to RMB676.4 billion in March, compared with RMB441.1 billion in February. It should be noted that changes in deposits are affected by a wide range of factors, such as interest rate movements and fund-raising activities. It is therefore more appropriate to observe the longer-term trends, and not to over-generalise fluctuations in a single month.

For the first quarter of 2021 as a whole, loans for use in Hong Kong (including trade finance) increased by 3.6% following a 5.4% decline in the previous quarter. Analysed by economic use, the increase in loans during the first quarter was mainly led by trade finance, loans to stockbrokers, and loans to building, construction, property development and investment.

As monthly monetary statistics are subject to volatilities due to a wide range of transient factors, such as seasonal and IPO-related funding demand as well as business and investment-related activities, caution is required when interpreting the statistics. 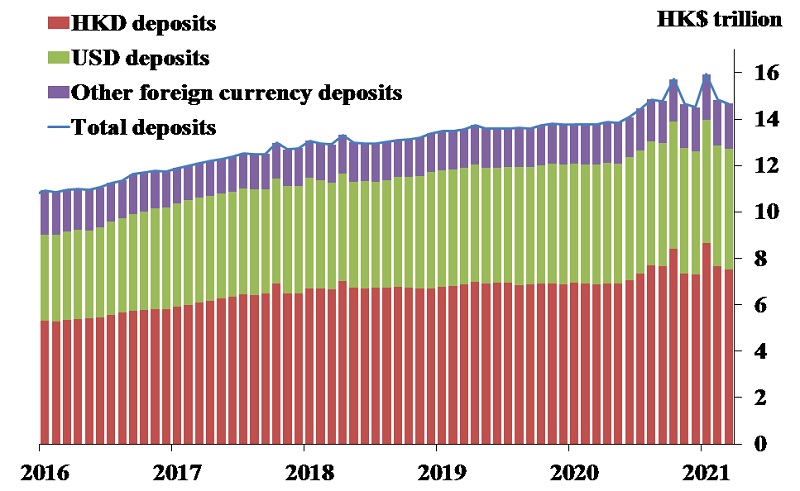