Investment Outlook for the Second Half of the Year: Stay Alert and Remain Cautious

Investment Outlook for the Second Half of the Year: Stay Alert and Remain Cautious

Last Thursday, we announced the results of the Exchange Fund for the first half of the year.  Despite an investment income of HK$126.5 billion, which represents the best half-year performance the Exchange Fund has ever recorded, the HKMA’s investment team stays on guard.  There is an old Chinese saying that “the moon waxes only to wane”.  After all, the price-to-earnings ratio of the US stock markets has been edging towards a relatively high historical level.  Looking ahead, the investment environment in the second half of the year is fraught with uncertainties.

Positive sentiment prevails across the global equity markets.  But how long will the party last?  Looking at the current situation, one will notice that the investment outlook is still plagued by uncertainties.  For example, the various economic stimulus measures as proposed by the new US administration have yet to materialise.  There are also uncertainties surrounding the pace of the US interest rate normalisation, the timing of commencement of the Federal Reserve’s balance sheet reduction and their impact on the financial markets and the real economy, the Brexit negotiations, whether geopolitical risks would continue to intensify, etc.  Adding to this is the fact that market reactions can defy common sense.  For example, contrary to conventional wisdom, the US dollar went down instead of up when the US announced an interest rate hike in June, bringing a sizeable positive currency translation effect when translating the Exchange Fund’s foreign currency assets into Hong Kong dollar.

The exuberance in the global financial markets, in particular the equity markets, appears to be borrowed rather than supported by economic fundamentals.  With a relatively fragile foundation, once the potential risks mentioned above begin to materialise and spread, market sentiment may quickly reverse which will exert great adjustment pressure on asset prices.  This is why we cannot afford to be complacent but must stay alert.

More meticulous readers of the news may have noticed that while fee payments by the Exchange Fund to the Fiscal Reserves and some statutory bodies amounted to HK$15.7 billion in the first half of the year, this sum did not include the fee payment to the Future Fund (which is only payable upon year-end close).  After deducting the payments and expenses, the Accumulated Surplus of the Exchange Fund recorded an increase of HK$91.7 billion.  This is the first notable growth following consecutive falls in 2014 and 2015.

Since April 2007, a new fee arrangement has been in place.  The annual fees paid by the Exchange Fund to the Fiscal Reserves and statutory bodies are based on the average annual rates of return of the Fund’s Investment Portfolio over the previous six years, subject to a floor of zero percent as a “capital preservation” arrangement.  During the past nine years or so (i.e. since 2008), the Exchange Fund’s fee payments under this arrangement amounted to more than HK$400 billion.  One of the benefits of this arrangement is that both the Government and statutory bodies can expect to receive a relatively steady stream of income from the Exchange Fund.  In particular, the “guaranteed minimum return of zero percent” provides a very good cushion – should the Fund incur loss in a particular year, it is still required to pay the fees based on its average return over the previous six years.  The year 2015 is an obvious example (see chart).  Despite the Fund’s investment loss of HK$15.8 billion in 2015, owing to positive annual rates of return in the previous six years, fee payments of HK$46.7 billion and HK$14.7 billion were made to the Government and statutory bodies respectively at a rate of 5.5% under the arrangement.  In other words, the fee payments for 2015 actually came from the Fund’s Accumulated Surplus.  The fairness of this arrangement is that during a “good year”, while the Investment Portfolio enjoys a more decent rate of return, it is very likely that the rate of fee payments to the Government and statutory bodies will be lower than the Investment Portfolio’s rate of return in that year.  This also explains why the Exchange Fund recorded a bigger increase in its Accumulated Surplus in the first half of 2017.  Of course, the rate of return this year will be reflected in the rates of fee payments in the coming years.  All in all, as we have often emphasised, the key is to take a long-term view of the Fund’s performance and avoid focusing too closely on the performance of any particular year.

Looking ahead, the investment environment is unprecedentedly complex in the post-quantitative easing era, marked by the new normal of low return, high volatility and reduced complementarity between stocks and bonds.  Short-term return of the Exchange Fund may fluctuate significantly at any time.  Good return for the first half of 2017 cannot be taken as an indicator of the Fund’s full-year results.  While it is important to strive for a reasonable return, the primary objective of the establishment of the Exchange Fund is to maintain monetary stability.  As always, we will adhere to the principle of "capital preservation first, long-term growth next" and prudently manage the Fund for the people of Hong Kong.

Investment Income and Fee Payments of the Exchange Fund 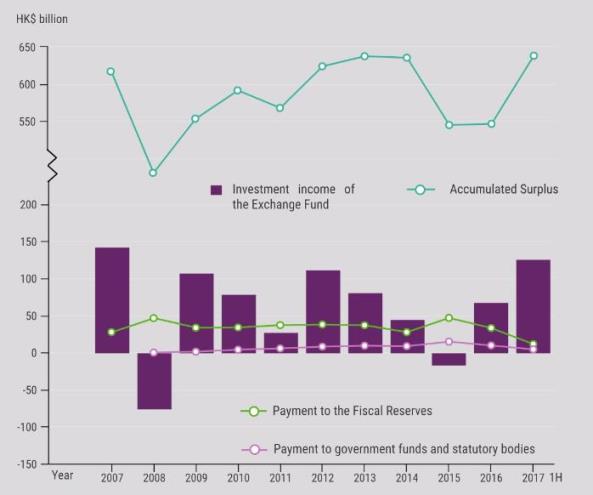