The launch of IFFO was officiated by Mr John C Tsang, the Financial Secretary of Hong Kong, and Mr Norman TL Chan, Chief Executive of the HKMA.  The guest of honour was Mr Chen Yuan, Vice-Chairman of the 12th National Committee of the Chinese People's Political Consultative Conference.  Other guest speakers at the launch were Mr Jin Liqun, President of the Asian Infrastructure Investment Bank, Mr Philippe Le Houérou, Executive Vice President and Chief Executive Officer of the International Financial Corporation, a member of the World Bank group, and Dr Victor Fung, Chairman of Fung Group and Advisor of IFFO.  The launch of IFFO was attended by well over 100 guests, including around 40 Partners of IFFO which include multilateral development banks and agencies, public sector investors, project developers and operators, commercial banks, asset managers and professional service firms from the Mainland of China, Hong Kong and overseas.

IFFO is an integral part of the HKMA.  Its mission is to facilitate infrastructure investments and their financing by working with a cluster of key stakeholders.  The functions of IFFO are:

In his opening address at the launch of IFFO, Mr Tsang said, “With its unparalleled connections with the Mainland and other markets worldwide, as well as its wide-ranging prowess as the regional international financial centre, Hong Kong is well-placed to serve as the centre for fundraising, project financing and asset-management for infrastructure projects in the region.”

In his remarks, Mr Chan said, “As the premier international financial centre in Asia and the global hub for offshore RMB businesses, Hong Kong is uniquely well positioned to play a crucial role in facilitating the implementation of the Belt and Road Strategy.”

The inaugural public event of IFFO will be a high-level conference, co-organised with the Boao Forum for Asia, to be held tomorrow (5 July) in Hong Kong.  The conference carries the theme of “Stimulating Growth in the Real Economy: the Role of Finance” and will explore, among other current topics, how infrastructure investments can promote economic development.

More information about IFFO’s work and its partners can be found in the attached IFFO factsheet and IFFO’s official website (www.iffo.org.hk). 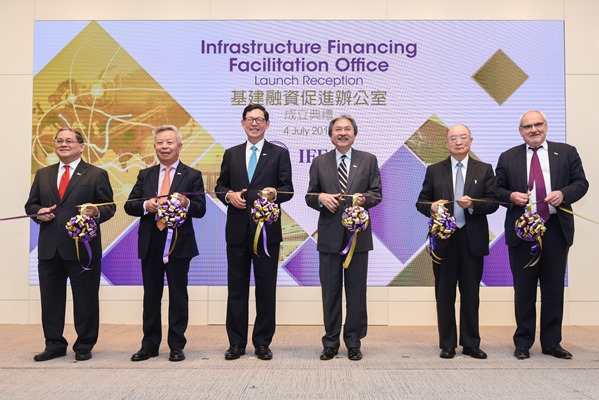 Ribbon-cutting by Mr John C Tsang, Mr Norman TL Chan and other guests at the launch of the IFFO.

Mr John C Tsang and Mr Norman TL Chan join other guests in proposing a toast at the launch.