As part of the design of Hong Kong’s Linked Exchange Rate System (LERS), the weak-side Convertibility Undertaking (CU) was first triggered during London trading hours on 12 April. In line with the LERS mechanism, the Hong Kong Monetary Authority (HKMA) purchased Hong Kong dollars at the rate of HK$7.85 to US$1 to maintain the currency peg. In this connection, I would like to address several frequently asked questions on this subject in the past few days.

Q1: How has the weak-side CU mechanism been functioning since the first triggering?

Q2: Should it be a concern when some HK$50 billion have flown out of the HKD within such a short period of time?

Chart 1: Changes in the Monetary Base 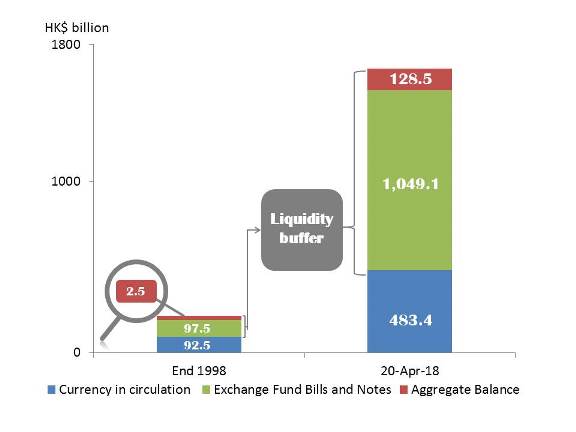 Q4: The HKMA has indicated on several occasions that the Aggregate Balance reduction and fund outflows provide the necessary condition for the normalisation of local interest rates. By how much the Aggregate Balance has to reduce before banks will lift their deposit rates and lending rates?

Q5: Do the current fund outflows involve any attacks by major international speculators? Has a war in defence of the HKD been started?

Q6: Can Hong Kong cope with any attempts to create havoc in our currency market?