The Bank for International Settlements (BIS) announced the results of the triennial survey on foreign exchange and derivatives market turnover last week. The results showed that the average daily turnover of foreign exchange transactions and over-the-counter (OTC) interest rate derivatives in Hong Kong increased by 18.2% to US$302.5 billion in April 2013 as compared with US$256.0 billion in the previous survey conducted in April 2010.

It is worth noting that among the foreign exchange activities, trading between the renminbi and other currencies grew significantly in the past three years and accounted for 17.8%1 of total average daily turnover, close to the 18.2% share2 of trading between the Hong Kong dollar and other currencies. The increase in foreign exchange transactions involving the renminbi is mainly driven by the rapid development of Hong Kong’s offshore renminbi market. However, some commentators have suggested that this is an indication of the Hong Kong dollar being marginalised. Perhaps these commentators have overlooked some of the characteristics of Hong Kong as an international financial centre. In an inSight article published in May 2011, I pointed out that currency “marginalisation” occurs when residents, for whatever reasons, lose confidence in their own currency. As a result, residents would prefer to use a foreign currency as a means of payment in domestic transactions, such as daily spending, salary payments and property transactions. Therefore, it is inappropriate to conclude that the Hong Kong dollar is being marginalised just by looking at changes in foreign exchange turnover.

Whether a currency has been marginalised in its own jurisdiction actually hinges upon the confidence of the local residents. In other words, are they willing to continue to use it as a means of payment and storage of value? In this connection, the confidence of Hong Kong people in the Hong Kong dollar is very strong. Alongside an expansion in our renminbi banking business, renminbi deposits in Hong Kong banks have grown an impressive 11 times since the end of 2008, reaching RMB695 billion at the end of July 2013. They now account for about 10% of the total deposits in the local banking system. But during this period, Hong Kong dollar deposits also rose 38% to HK$4,179 billion, or about 50% of total deposits, which is an average ratio for the past 20 or 30 years. This suggests that the renminbi deposits are not growing at the expense of Hong Kong dollar deposits. In fact, our foreign currency deposits have always accounted for around 50% of the total deposits in our banking system, which is similar to situations in other international financial centres such as the UK and Singapore.

In an international financial centre such as Hong Kong, market participants may choose any currency for their financial transactions. At the HKMA we have strived to facilitate transactions in various currencies by building the necessary US dollar, euro and renminbi real-time gross settlement systems. As Hong Kong consolidates its position as a global hub for offshore renminbi business, it is only natural that more financial transactions will involve the renminbi and other foreign currencies. But we do not need to be overly concerned about this trend. After all, foreign exchange transactions are but one of the many types of financial activities. The volume of foreign exchange transactions alone tells little about the overall competitiveness or success of an international financial centre. We should be mindful of this when we look at the relevant figures. 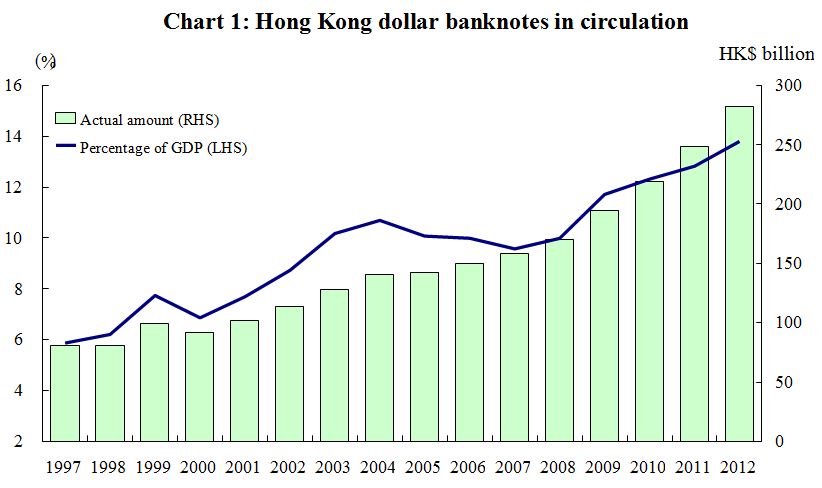