I and my colleagues at the Hong Kong Monetary Authority (HKMA) conducted a roadshow in Moscow jointly with China Development Bank last Wednesday (15 June) to promote Hong Kong's offshore renminbi business platform. We held a luncheon seminar which attracted an audience of over 120 participants, including the senior representatives of enterprises, banks and financial institutions from Russia and Eastern Europe. Mr Sergey Storchak, Deputy Finance Minister of the Russian Federation also spoke at the event. The seminar was a success in that it has considerably raised the awareness and interest of Russian financial institutions and enterprises about using renminbi to settle trade and investment with China, and at the same time bolstered Vnesheconombank's (The Bank for Development and Foreign Economic Affairs of Russia) plan to issue renminbi bonds in Hong Kong and make use of the renminbi products and services offered by the Hong Kong market. Moreover, VTB (a leading commercial bank in Russia) has also indicated interest in issuing renminbi bonds in Hong Kong again.

Our roadshow in Moscow coincided with President Hu Jintao's state visit to Russia. I noted that, President Hu remarked after his meeting with the Russian President Dmitry Medvedev that China and Russia would strengthen economic and trade co-operation with a view to expanding the volume of bilateral trade between the two countries from US$56 billion last year to US$100 billion before 2015, and further to US$200 billion by 2020. In fact, trade activities between China and Russia already registered substantial and continuing growth in the past decade, increasing from a mere US$8 billion in 2000 to US$56 billion in 2010, or by six times in ten years.

I am very optimistic about the outlook for economic and trade co-operation between China and Russia, which are the world's second and sixth largest economy respectively (in purchasing power parity terms). On one side of the equation, Russia has abundant natural resources such as petroleum and natural gas, and also some high-tech products. On the other side, China is widely regarded as the world factory, producing the most extensive list of merchandise. Quadrupling the volume of bilateral trade in the next ten years is surely mutually beneficial to the two countries and also a very good outcome for everyone.

But to achieve this outcome both sides will need to work hard to encourage and promote bilateral trade and investment, by facilitating interactions between not only large state enterprises but also private enterprises of different sizes, thereby creating and seizing new business opportunities. To support the continuous growth in economic and trade co-operation between China and Russia, a key element is to promote the use of the domestic currencies of the two countries for payment and settlement of bilateral trade and investment. Using domestic currencies not only reduces exchange rate risk and currency conversion costs, it can also help lessen the over reliance on the US dollar and the euro.

China introduced the pilot scheme for cross-border trade settlement in renminbi in July 2009. In the first half of 2010, trade settled in renminbi amounted to a mere 0.7% of China's total trade, but it increased to 4% in the second half of 2010 and further to 7% in the first quarter of 2011. With the promotion efforts of the HKMA and others, I envisage more countries and overseas enterprises would appreciate the benefits of settling trade transactions in renminbi and choose to do so for some of their trade transactions which in the past could only be settled in US dollar or a currency of an unrelated country. This will lead to continued increases in the portion of China's trade settled in renminbi. Against this trend, Hong Kong's offshore renminbi business platform has huge potential to develop further, not only in serving domestic enterprises but also in supporting the development of offshore renminbi business in overseas locations. I believe Moscow and other financial centres that have close economic and trade links with China will start to provide renminbi services to their clients over time. In doing so, they will make use of Hong Kong or services provided by correspondent banks on the Mainland to conduct cross-border renminbi payments. Hong Kong's advantage is the ability to provide one-stop offshore renminbi services, from basic ones such as cross-border payment and deposit-taking, to a comprehensive range of financing (such as bank lending and issuance of dim sum bonds) and investment (such as bonds, funds and insurance) services. Looking from a different perspective, as Hong Kong's offshore renminbi business platform develops further, it will also be conducive to the internationalisation of renminbi.

The HKMA will be conducting more overseas roadshows to promote Hong Kong's offshore renminbi business platform. We have planned to go to London in September, Spain in October and South America early next year, with the aim of increasing the understanding of overseas enterprises and financial institutions about the benefits of settling trade and investment with China in renminbi, and also the one-stop services provided by the Hong Kong offshore renminbi business centre.

Norman Chan, Chief Executive of the Hong Kong Monetary Authority, delivers a keynote speech at the luncheon seminar "The Use of Renminbi in Cross-Border Trade and Investment – A New Era" in Moscow. 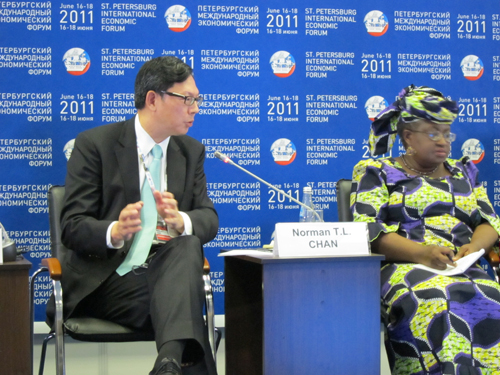 At the seminar "Emerging Markets Shaping a New Global Economy" at the St Petersburg International Economic Forum, Norman Chan expresses optimism for the economic and trade co-operation between China and Russia, and promotes the use of the domestic currencies for payment and settlement of bilateral trade and investment.