During the first half of 2010 when renminbi (RMB) cross-border trade settlement was still at the initial stage of development, both RMB trade settlement and RMB deposits in Hong Kong were growing rather modestly. Back then some people were concerned that offshore RMB business in Hong Kong might not be able to take off. Some even considered the Hong Kong Monetary Authority (HKMA) too conservative in promoting this new business. However, with strong support from the Central Government and relevant authorities, and with the joint effort of the HKMA and various sectors in Hong Kong, development of RMB business in Hong Kong has made very good progress since the second half of 2010. The significant growth in the use of RMB for trade settlement was particularly noteworthy. RMB trade transactions settled through Hong Kong made up more than 70% of the Mainland's total RMB trade settlement in 2010. The proportion grew further to more than 80% in the first quarter of this year. RMB deposits were also growing at a fast pace, and increased from RMB60 billion in January 2010 to RMB310 billion in December 2010, and further to RMB510 billion by the end of April 2011. Of these deposits, two-thirds are from corporate clients while the rest are from personal customers. With Hong Kong's development as an offshore RMB centre gradually taking shape, some commentators have expressed concerns about the potential risks that might arise from such rapid development of our RMB business, including the substitution of RMB for the Hong Kong dollar, or in other words "marginalisation" of the local currency. I think these concerns are ill-founded, and I will explain why.

As a start, let's look at what "currency substitution" and "marginalisation" actually mean. Generally speaking, currency substitution occurs when domestic residents, for whatever reasons, lose confidence in their own currency, as a result of which domestic residents would prefer to use a foreign currency as a means of payment in domestic transactions, such as daily spending, salary payments and property transactions etc.

I have noticed two misconceptions being raised by some commentators. First, they think that wider circulation of RMB in the retail market is "currency substitution". The fact is that as tourists around the world come to Hong Kong to shop and spend, retail shops and merchants would seek to facilitate these customers by accepting payment in foreign currencies, such as the US dollar, pound sterling, euro, Japanese yen and Australian dollar. RMB is just the same. As more Mainland tourists visit Hong Kong, it is only natural that we see a greater use of RMB. This is a result of our booming in-bound tourism industry and has nothing to do with any loss of confidence in the local currency. Actually we do not see any local shop refusing to accept Hong Kong dollar and requesting domestic customers to use RMB to pay for goods or services.

The second misconception is the notion that the growth in RMB deposits means that the Hong Kong dollar is being marginalised. RMB deposits have indeed grown very rapidly, and now they make up around 8% of the total deposits in Hong Kong. But it is important to point out that most of the increase in 2010, amounting to RMB250 billion, came from deposits from corporate clients (RMB180 billion). Deposits by these clients are mostly RMB funds remitted by Mainland enterprises into banks in Hong Kong to pay for imports of goods and services, rather than conversion from Hong Kong dollars by Hong Kong companies. As for RMB deposits from personal customers, some of them do come from conversion of Hong Kong dollars for payment, savings or investment purposes. But again the conversion into RMB by personal customers does not involve Hong Kong dollars only, as foreign currency deposits are also being used. Such currency switching is just normal asset allocation behaviour by individuals and should not be mistaken as evidence for Hong Kong residents' reluctance to use or hold the domestic currency because of a loss of confidence.

Confidence of Hong Kong people in the local currency has indeed remained strong, as evidenced by the amount of Hong Kong dollar banknotes issued in the past ten years. Hong Kong dollar banknotes, together with credit cards and debit cards, continue to be the primary means of payment in daily domestic spending by Hong Kong residents. Over the past ten years, the value of Hong Kong dollar banknotes in circulation increased from HK$108 billion at the end of 2001 (8% of Gross Domestic Product (GDP)) to HK$227 billion at the end of 2010 (13% of GDP). This shows that the use of Hong Kong dollars in payment is not only far from diminishing, but has in fact grown faster than the economic output. If we look at London, which over the years has developed into the most important offshore Eurodollar centre in the world, the pound sterling has not been displaced or marginalised, and has remained the predominant currency used in payments and other commercial transactions by local residents. 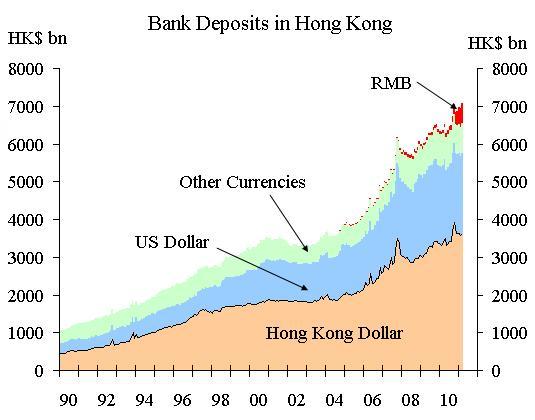 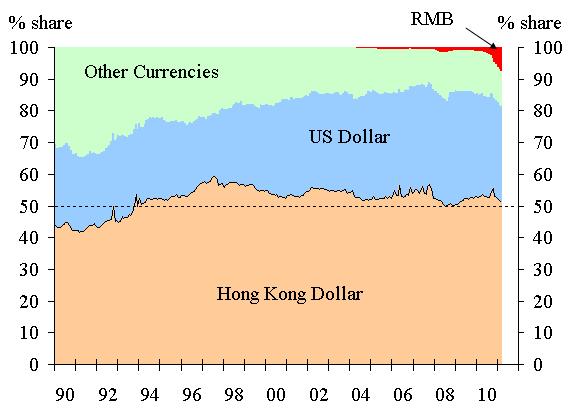 Likewise, as the internationalisation of RMB progresses, the accumulation of a big pool of RMB in Hong Kong reflects the attraction of Hong Kong as an offshore RMB business centre. Many overseas companies have chosen to place RMB funds received from trading, investment and other channels in Hong Kong, thereby enabling Hong Kong to form the largest RMB liquidity pool outside Mainland China. Though the outlets for RMB lending and investment are still somewhat constrained at this stage, Hong Kong has already become the hub for RMB fund raising. In 2010, the total value of RMB bonds issued in Hong Kong was RMB35.8 billion. Issuance in the first four months of 2011 already reached RMB18.5 billion. Such strong growth is expected to continue. Moreover, we are seeing more diversified debt issuers and investors coming from Asia, Europe and America. As I have explained, significant growth in RMB deposits and in other channels of financial intermediation in Hong Kong indeed demonstrates our success as an international financial centre and offshore RMB business centre. There is no need to worry that such developments will undermine the status of the Hong Kong dollar.