The Hong Kong Monetary Authority (HKMA) and the Monetary Authority of Singapore (MAS) today (15 November 2017) exchanged a Memorandum of Understanding (MoU) in Singapore to jointly develop the Global Trade Connectivity Network (GTCN), a cross-border infrastructure based on distributed ledger technology (DLT), to digitalise trade and trade finance between the two cities and potentially with an aim to expanding the network in the region and globally.

The GTCN is the first strategic joint innovation project arising from the Co-operation Agreement signed by the two authorities last month1. The goal of the project is to build an information highway using DLT between the Hong Kong Trade Finance Platform and the National Trade Platform in Singapore, which will make cross-border trade and financing cheaper, safer, and more efficient.

The MoU, signed between heads of the two authorities, was exchanged at the 2017 Singapore FinTech Festival organised by MAS. As part of a workshop held during the FinTech Festival, the two authorities also commenced a joint discussion with major DLT solution providers to develop business and technical models for the GTCN, which is expected to conclude in Q1 2018. The GTCN is expected to go live by early 2019, to tie in with the targeted go-live dates of the Hong Kong Trade Finance Platform and the Trade Finance Modules on the National Trade Platform in Singapore.

Norman Chan, Chief Executive, HKMA, said, “I am very pleased that the HKMA is joining hand with MAS to develop a DLT-based interface linking the digital trade finance platforms in the two centres. The GTCN is going to remove the inefficiency and risks of fraud inherent in the existing paper-based system in trade finance. Once implemented, the interface, likely to be the first of this kind in the world, has been designed with an open architecture that would allow Hong Kong's other trading partners to plug into it in future. We feel really excited about this project as it clearly demonstrates the HKMA's commitment to step up cross border collaboration in Fintech to better prepare Hong Kong to enter into the new Smart Banking Era”

Ravi Menon, Managing Director, MAS, said, “Singapore, via the National Trade Platform, is committed to the digitalisation of trade, which will transform the industry by streamlining processes and enhancing risk management. This innovative project with Hong Kong is an excellent showcase of how two leading international financial centres in Asia can drive the transformation of trade and trade finance. ” 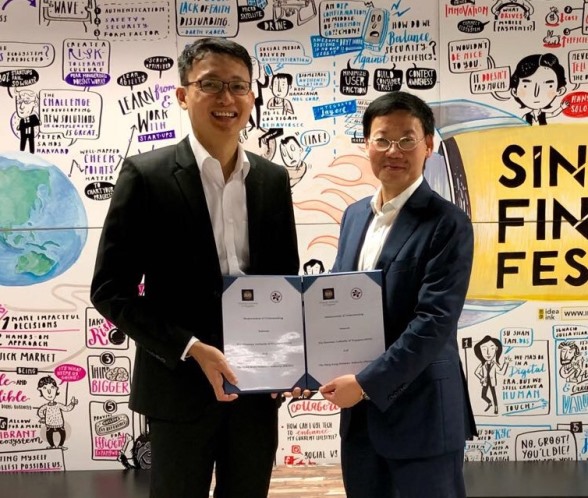 1 The HKMA and MAS signed an agreement to strengthen co-operation on fintech between the two cities and foster fintech development within the region. The Co-operation Agreement was exchanged on 25 October 2017, at the Fintech Day organised by the HKMA. Related press release is available on the HKMA website.