Memorandum of Understanding between the HKMA and the CBRC

Memorandum of Understanding between the HKMA and the CBRC

The Hong Kong Monetary Authority (HKMA) and the China Banking Regulatory Commission (CBRC) today (25 August) signed a Memorandum of Understanding (MOU). The MOU provides for the sharing of supervisory information and co-operation in the area of banking supervision.

Under the MOU, the HKMA and the CBRC agree to work together

"The signing of the MOU between the HKMA and the CBRC makes an important milestone in co-operation between the two organisations," said Mr Joseph Yam, Chief Executive of the HKMA. "I am confident that with the implementation of the MOU the two regulatory authorities will be able to work together to enhance cross-border supervision of financial institutions in Hong Kong and the Mainland," said Mr Yam.

"The existing ties of Hong Kong and the Mainland banking systems and the common interests in upholding financial stability and prudential principles reinforce the need for strengthening co-operation between the two supervisory authorities," said Mr Liu Ming-kang, Chairman of the CBRC. "This is now further reinforced and formalised in the MOU," added Mr Liu.

Under the MOU, the two supervisory authorities agree

A photo showing the signing of the MOU is available on the HKMA website at http://www.hkma.gov.hk 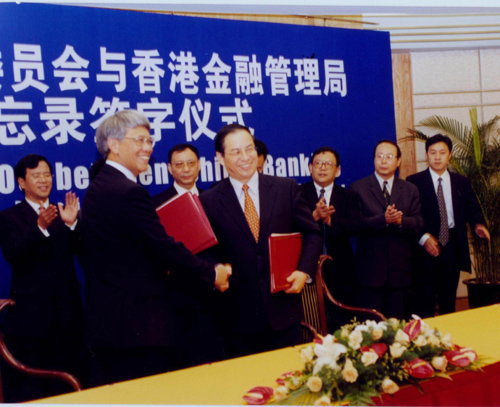