The Programme is a joint initiative based on the Memorandum of Understanding signed last year between the HKMA and the Office of Financial Development Service, the People’s Government of Shenzhen Municipality (OFDS) with a view to nurturing talent for fintech. It is also one of the four key programmes of the Fintech Career Accelerator Scheme 2.0 launched by the HKMA. The Programme is organised by the Fin Society, sponsored by the HKMA and supported by the OFDS. It aims at raising the competence of fintect talents in Hong Kong in order to meet the increasing demand from the industry. Under the Programme, 50 students from tertiary educational institutions in Hong Kong will be assigned to eight leading fintech or techfin firms on 6-week internships to experience the fintech ecosystem in Shenzhen.

Mr Howard Lee said, “To build a first-class international fintech centre for Hong Kong and Shenzhen, we must enhance soft power by expanding the fintech talent pool in a sustainable manner in order to invest on this important resource. Hong Kong and Shenzhen have their own edges on fintech development. Hong Kong has a large number of financial elites while Shenzhen has talents for technology and innovation. Strengthening the talent development in the two places can create synergy and mutual benefit, and attract talents from all over the country and the world to establish themselves in the Greater Bay Area.” 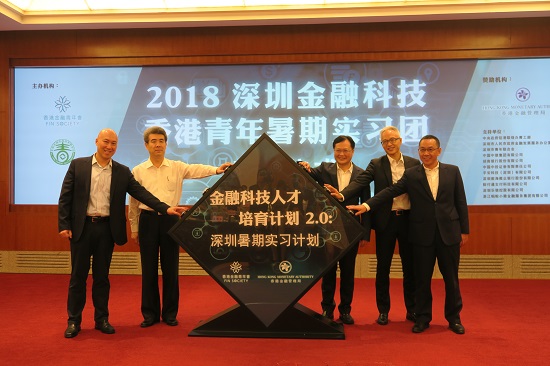