The HKMA and MAS will collaborate on a number of initiatives, including joint innovation projects, referrals of innovative businesses, information sharing and exchange of expertise, to facilitate financial innovation in Hong Kong and Singapore. The Agreement, signed between heads of the two organisations, was exchanged at the Fintech Day organised by the HKMA.

Mr Norman Chan, Chief Executive of the HKMA, said, “Hong Kong and Singapore are the two leading international financial centres in the region and are actively deploying fintech.  Collaboration between the HKMA and MAS will create significant synergy for the development of fintech and more efficient fund flows between the two markets.”

Mr Ravi Menon, Managing Director of MAS, said, “MAS is delighted to embark on this FinTech partnership with Hong Kong.  This is one of our more significant FinTech co-operation agreements, given the extensive financial and trade linkages between Singapore and Hong Kong.  We are especially pleased that we have a live project to enhance the trade finance corridor between the two financial centres.” 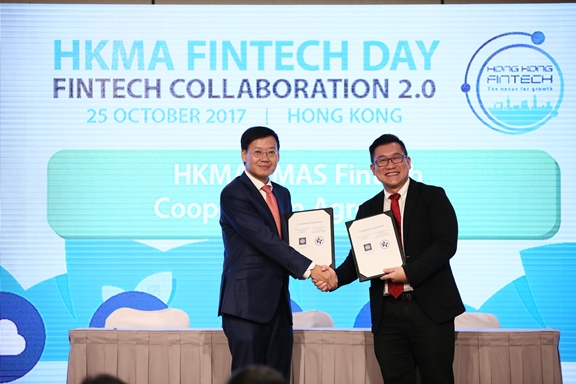 Mr Shu-pui Li, Executive Director of the HKMA (left) and Mr Roy Teo, Head, Financial Centre Development Department of MAS (right) exchange the Co-operation Agreement, which was signed between heads of the two organisations, at the HKMA Fintech Day today.